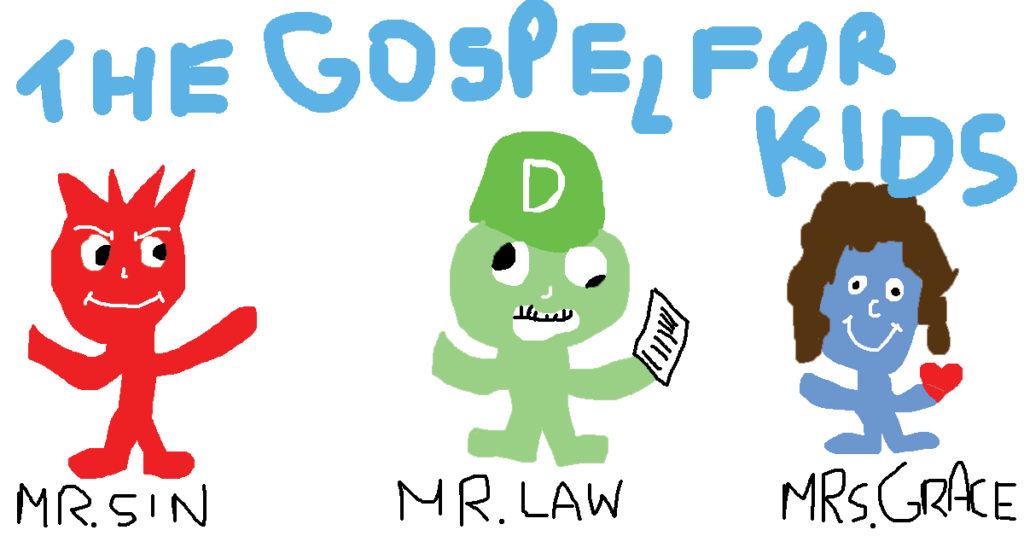 Once upon a time there was a person called Mr. Law and he wanted nothing more than to help people to be happy and safe.

You see people had a problem, there was a very naughty man called… Mr. Sin and he didn’t like people one little bit!


He would always sneak up on people when they least expected and make them do terrible things.

And then they would end up in jail for being naughty!

The problem was that Mr. Law… Despite his best intentions… Didn’t really understand how people worked.

He didn’t know that people liked to think they can do things all by themselves and this was the main way Mr. Sin would trick them.

The more people did things by themselves the more they would end up hurting people.

So Mr. Law thought… “If only I can give them better instructions on what they should do – then they will be able to avoid Mr. Sin!”

But silly Mr. Law couldn’t see he was only going to make things worse! Although he wanted to help people and stop Mr. Sin he accidentally helped Mr. Sin trick people even more than before!!! (Oh no!!!)

Even though his instructions were very good, they were to hard for people to follow and they messed up even more!!

Mr. Law told people to try really hard to do what he said. But he was actually only helping Mr. Sin! What a silly mistake!

So even more people ended up in jail!!

Mr. Law didn’t know what to do! Who would help them now?

But there was another person who loved people just as much as Mr. Law. She was called Mrs. Grace. Just like Mr Law, she loved people so much and hated seeing them get hurt. But she was a lot more clever!

She knew that the more people tried to do something the more Mr Sin could trick them into hurting themselves and one another.

So she hatched a new plan.

First she locked up Mr. Sin up in a jail forever and ever.

But the second part of her plan was the really clever bit. She would not tell people what to do but instead would just love them lots and lots and lots.

She came and lived with all the people and loved them lots and lots. Now they wouldn’t have to try and do things on their own anymore!!

An interesting thing happened… The more time people spent with Mrs. Grace and the more she loved them, the nicer and more loving they became.

They didn’t ever have to worry about Mr. Sin again.

He was going to be a teacher.

He’d teach people about how things used to be – when they used to live trying to do things all on their own and how Mr. Sin tricked them into being hurt. He’d talk about how he had tried to help them and even though he had the best of intentions he only made things worse. But then he’d explain that is when Mrs Grace came and rescued everyone from Mr. Sin.

And everyone lived happily ever after…

There were some people who would listen to Mr. Law’s lessons and decide they didn’t want Mrs. Grace’s help. They wanted to try the old way. They thought Mr. Law’s idea was great. And they started trying really really hard all by themselves to use the old instructions! Even though Mr. Law himself said they were useless now!

But do you know what happened?

Even though they were trying to be good… They got hurt and hurt lots of other people too.

They ended up right in jail with Mr. Sin!

Mrs. Grace sat with them every day in jail and told them if they wanted to come out and play with her they could do that any time they liked. She wasn’t mad with them and loved them so so much.

And lots did come out to play. Some did it immediately, others took weeks. Some still haven’t come out yet! But Mrs. Grace is still talking to them… So I’m sure they will come out to play soon enough.

If you think this post is something people need to read please give it a share. The good news of the gospel is worth sharing!!
Send this to a friend