Sarah and I got to spend Christmas with my family this year.

It was the first time in 6 years for me and I had such a great time! As a huge bonus we got to see many good friends we had been sorely missing since moving to Ireland as well.

Oh yeah, and we were also sued for almost a fifth of our yearly income! 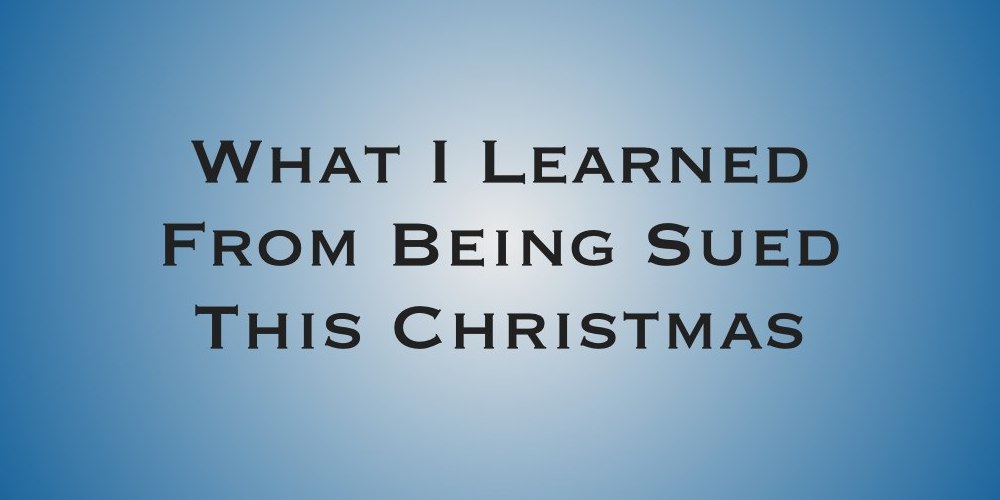 One evening we visited our close friend Alex (who did the cover for my eBook) who happens to live at our old apartment, given how quickly we had up and left the country in September we weren’t too surprised to find he had some mail for us.

Getty Images. Hmm… I vaguely recognise the name but why were they writing to me?

I did what all people would do – instead of waiting to open the letter when I got home so I could enjoy the evening with our friends – I ripped it open and skimmed through it.

I often use images to supplement my blog posts. To find these images I use royalty-free search engines to find photos that are free to use. However, it turns out I had ended up using two images which, unknown to me, belonged to Getty Images. These images were royalty-free but apparently for a few reasons they were still subject to copyright (honestly I have no idea how it all works!)

Long story short: These images had been on my website for roughly one year and Getty Images were demanding I pay £900 ($1450) each for having used them and remove them from the site immediately!

What was I to do?

I immediately grabbed my phone and started to research the topic. Despite the fact we were supposed to be enjoying a rare evening with some close friends.

I found out that this was a very common thing, there were literally thousands of people who had been sued by Getty Images. It wasn’t something I could ignore (people who did found themselves in court) but it did seem that most people seemed to be able to settle for less than the initial demand – usually around 50% less.

Anyway, all this to say, as you can imagine it really put a dampener on my evening!

In fact I was perfectly miserable the whole night!

I had just done our tax return for the year and at my calculation even at 50% of what they were asking we were looking at around a tenth of our yearly income gone up in smoke over a simple mistake!

The next day I sent them a friendly email explaining 4 primary things:

I asked if they would be willing to renegotiate on the settlement cost considering the above.

It was then a waiting game to see what they would say.

Looking back on the experience there were a few key things which were really hammered home for me.

1. Be present in the moment

When Alex handed me the mail I didn’t need to open it.

In fact opening the mail ruined my night in many ways. There was nothing I could do about it till the morning. I gained nothing from doing it and lost a chunk of my precious evening, with good friends who I rarely get to see.

If I’m honest with myself – this is something I’m really guilty of.

How often do I “quickly” check my email only to find I have an “urgent” or unpleasant email. My one minute checking emails then causes me to check out of what I’m doing mentally for much longer!

Anyway – it was a good reminder to be present in the moment and not let little things distract me, because often they end up being a much bigger distraction than they initially seem.

2. You are never earning too little to save!

For many years I didn’t save money, “I’ll do that when I can afford to” was my mantra. Now I earn less than 20% of what I used to and I sure wish I’d saved! No matter what your income is, you should be saving if only to create a buffer between you and life.

If you haven’t come across Dave Ramsey I can only assume you live under a rock somewhere. He has written 3 New York Times Bestsellers which help people with their finances! He has a daily radio show listened to by millions where he gives advice on how to handle finances in a Biblical way.

Sarah and I read through his stuff the week after we got married and it’s changed our lives financially. Despite us having very little income, using Dave’s advise we had a small “emergency fund” (he recommends initially regardless of income saving $1000). Before I had any savings this unforeseen event would definitely had me reaching for a credit card and going into debt. Now I could pay for it using our emergency fund and continue on planning for the future rather than worrying about how to deal with past mistakes.

If you aren’t completely debt free, with 3-6 months expenses in savings and a robust retirement plan then I highly recommend you check out Dave’s book Total Money Makeover as he will help you work towards all of the above and more, regardless of your income!

3. Wallowing in self-pity is never helpful

I struggled with depression and negativity for a decade. I’ve learned to watch myself for the temptation to enter into old habits when bad things happen.

It’s OK to be upset or discouraged by negative things temporarily but what we choose to do next is extremely important.

We can choose to be positive about how things will turn out or we can stay negative and throw a little pity-party. This is when we head from sadness into depression. It’s where an event runs the risk of fuelling a lifestyle.

My wife knows me well and can spot when I’m not doing a good job maintaining good mindsets. As soon as she saw I was letting the situation get the better of me she walked over, sat next to me and said “Lets get excited to see how God turns this around for good”.

Honestly I wasn’t overly happy about that – I was already enjoying my trip down to Negativity Town and she clearly didn’t understand that this was the end of the world!

But on the other hand it gave me a wake up call.

I had to ask myself, was I going to let my emotions rule me? Or was I going to acknowledge those emotions as real and important and move on embracing the truth – of course God will turn this around for good!

Self-Pity is NEVER your friend.

4. Worry is putting your faith in something that most likely won’t even happen.

The truth is though that worry is the same… the only difference is that your wish sucks.

The problem we have is that we seem to have put a lot of effort into developing a habit of worrying.

We need to re-train our minds to confidently expect good to happen. Like Sarah said to me… we need to get excited to see how God turns things around for good.

5. Things are rarely as bad as they seem at first

When I think back on the various things I get upset/worried/negative about in life very rarely are things remotely as bad as I had imagined them. In fact, most of the time (shock horror) God turns them around for good as He promises. Even when it doesn’t seem He’s done so, I’m sure in due course I will see His hand working things together.

This situation was a great reminder of this truth especially.

I finally got an email back 5 days later from Getty Images that made me very happy. They were willing to give me an 80% reduction on the settlement.

Anyway – those where 5 lessons I learned from a bad situation that happened to me this Christmas.

My question to you is – What is something that you’ve learned recently through a negative experience that has changed your life for the better?

If you think this post is something people need to read please give it a share. The good news of the gospel is worth sharing!!

Send this to a friend